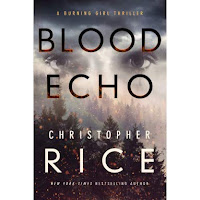 This is the first book that I have read by Christopher Rice. Even though this is the second book in the Burning Girl series, I found it still easy to follow without having read the first book first.

Charlotte Rowe is a very intriguing character and truly adds to the story that is unfolding. As the story progresses you learn more about her and her abilities.

The first few chapters of the book was hard to get into but as the story progressed it got better. Eventually I struggled to put the book down.

Christopher Rice does a nice job at creating suspense and intrigue. The characters are well written. I am still unsure about Charlotte Rowe's boss and if he is an antagonist in this series or not.

Kidnapped and raised by serial killers, Charlotte Rowe suffered an ordeal that made her infamous. Everyone in the world knew who she was. But no one in the world has any idea what she’s become…


Charlotte is an experiment. And a weapon. Enabled by a superpower drug, she’s partnered with a shadowy pharmaceutical company to hunt down and eliminate society’s most depraved human predators. But her latest mission goes off the rails in a horrifying way. Unsettled by her own capacity for violence, Charlotte wants some time to retreat so she can work on her new relationship with Luke, a sheriff’s deputy in the isolated Central California town she now calls home.
If only the threats hadn’t followed Charlotte there.
Something sinister is evolving in Altamira, California—a massive network of domestic terrorists with ties to Charlotte’s influential and corrupt employers. As a vast and explosive criminal conspiracy grows, the fate of Charlotte’s hometown hangs in the balance. With everyone she cares about in danger, Charlotte has no choice but to bring her powers home.
Charlotte Rowe has been triggered, and now she’ll have to take matters into her own powerful hands.

Popular posts from this blog

September 01, 2019
Review
This is one of the first Wolfe Security books that I have read from Laura Griffin, although not the first book that I have read of Laura Griffin's.
The story is well written and is filled with some very good twists. There is also a great amount of sexual tension written throughout the book, which helps develop the character's stories. Laura does a great job with intertwining each of the main character's stories. Laura does well with providing background information on the characters. It did take me a while to understand why Jeremy was being introduced into Kira Vance's story, however, I am so glad that he became apart of her story. The sexual tension between Kira Vance and Jeremy is almost painfully drawn out and the longer it goes on the more you want them to just hook up.
The other main characters are Logan (Lawyer), Charlotte Spears (Detective), and Ollie (Kira's boss). Much of Ollie's story is given in the past tense. Logan is part of the Logan and Loc…
Post a Comment
Read more

September 09, 2019
Review
The same two cops are called to the same location that they had previously been called to and had found nothing suspicious outside so they dismissed it. Now they are wondering if they had missed something. Could it be that something was wrong the first time? A caged girl is found in the home, which is booby trapped. Cops and FBI agents are killed and injured. Is this the work of a serial killer? Is there a connection to the Mayan myth of the hero twins? Could there possibly be a mole in the FBI or even worse?

This the first book in the Agent Sayer Altair series, which currently consists of two books.
One of the things that I really struggled with was the use of animals in the books. I am a huge animal lover and even though their is no direct cruelty to the animals there is indirect and it was very hard for me to read about.

The plot is easy to follow and it is filled with lots of twists and turns. I found it quite hard to figure out who the serial killer was and when it was fina…
Post a Comment
Read more

October 13, 2019
Review
This is the first book that I have read by Kerry Wilkinson, so I was unsure what to expect. The story starts out strong and introduces you very quickly to the background story of what will eventually become the primary case that is being investigated by Andrew Hunter. Andrew is hired pro bono by Fiona Methodist to look into her father's case. Her father is deceased, but she refuses to believe that her father was responsible for the death of two young college students who were witness to a jewelry store robbery.
In addition to Fiona Methodists' case, Andrew is also hired to look into the theft of two highly awarded Bengal cats. This case adds a bit of humor to the overall story, as Andrew does not like cats.
The complicated relationship dynamics that Kerry build into the story help to provide some airiness to what other wise is a sad story, when thinking of Fiona Methodist. There is the complicated and yet romantic relationship between Andrew and his ex-wife Keira, who he…
Post a Comment
Read more